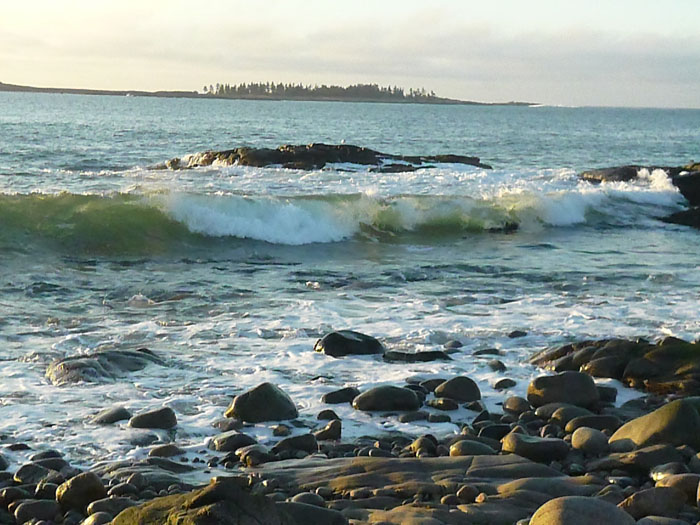 These are a few photos from my experience as an Artist in Residence at Acadia National Park during their centennial year.  For fifteen amazing days I explored, sketched, painted, and breathed in the magic and mystery of this beautiful place.   There is no doubt in my mind that every season there has its own special enchantment, but early spring, with its bursts of sun, chilly winds, and cool nights, is a very special time indeed.  It is a quiet time at the park before the summer season begins, a time to watch as nature slowly emerges from winter dormancy.

During my first outing on the Sundew Trail, I painted in the quiet woods out of reach of the sharp wind.  Working small, I captured filtered light falling on the base of the pines in this enchanted forest.

Standing at the top of Schoodic Mountain

Waking at dawn allowed me to experience the first light and all the nocturnal creatures finishing up their snacks before heading to their dens.

The sunrises at Schoodic are extraordinary.  It is hard, if not impossible, to put into words the sense of light I experienced there.

Climbing to the top of Schoodic Mountain was exhilarating.  Little did I know that the views continued if I continued along the trail.  Later during my stay I discovered the extraordinary views along the rest of the summit and down the steep and dramatic Anvil Trail.

I snapped a lot of photos to get this lovely one of the rolling wave coming into the cobble beach at Blueberry Hill.  The sound of the cobbles rolling and jostling in the incoming tide was pure music, the music of natural forces working together–wave action moving rock against rock, rattle and roll.

Here are two small paintings I did on the beach at Blueberry cove while listening to the music of the cobbles.  In the second version, the one with pastel, below, you can really feel the glow of the morning sun.

By the time I’d been at Schoodic for about twelve days I felt ready to work in the studio.  My time was too short but I was able to complete these two acrylic paintings in the studio.  In both, I felt the energy and power of the natural forces that shaped the land and created its unique identity.