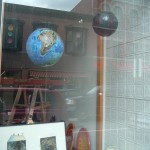 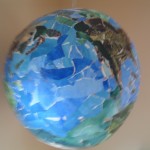 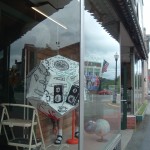 Organized by Abby Shahn, the globes show was an open and participatory exhbit for artists to create their view of the world, seen or unseen.  After much planning, Abby received permission from business owners in downtown Skowhegan to allow us to install our globes in empty storefronts on the main street of town.  The artists converged on downtown Skowhegan in early August and began the installation, which took viewers up and down the main street to a variety of windows and to a wide range of interpretations of the concept of “worlds.”  I worked with Kenny Cole to hang my two contributions to the show, both constructed of paper mache layers over toy balls. It was exciting to watch as artists continued to arrive, bringing their contributions to the show.  After taking the work down from the Skowhegan venues, Abby arranged to travel the majority of pieces to the storefront window of Space Gallery on Congress Street where they were on view through the October art walk.

Thanks to all the artists who contributed their energy, imagination, and vision of “worlds seen and unseen” to the 2011 globes show, and especially to Abby Shahn for her creative vision and persistence.