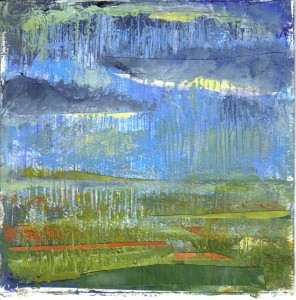 We live in a “drive by” culture where everyone is in fast forward motion.   I strive to create works of art with the capacity to arrest this motion–works that call on people to pause, momentarily, and interact, absorb, reflect, and respond to the image presented.  Viewers may respond purely to the form of the image, noticing color, light, and texture–the formal elements, but I am hopeful that the image will also evoke something deeper, perhaps calling upon a personal memory or physical sensation of what it feels like to be in a particular environment or natural condition.  This is, in my mind, the contemporary artist’s challenge.

Painting is only alive to the extent that it can generate an engaged response from the viewer without the added element of textual analysis or written artist statements.  These written documents can be valuable to the viewer “after the fact,” but engagement with the art object is primary.  Robin Brooks, September 2009

artist’s note:  I thank Molly Thompson of Portland, Maine for her engaged dialogue on these issues during our annual Study Group Retreat which took place this year during the weekend of September 17, 18, and 19 on Long Island in Casco Bay.  Our discussion helped me to formulate my thoughts on the role and function of contemporary art.  I invite Molly and others to continue the discussion using the “comments” function on my blog.  RB

http://www.nytimes.com/2009/09/28/opinion/28krugman.html?_r=1  Just yesterday, Paul Krugman, one of my favorite New York Times columnists and a Nobel prize-winning economist, has written about the urgency of climate change.

I have been following the science of climate change for a number of years as a lay observer.   In addition to painting ‘in plein air,’ I love to grow flowers and plants.  I plant seed garlic in the fall before the ground freezes hard.  The seed garlic  overwinters in a rich bed of compost with layers of mulch blanketting the seed bed from the vagaries of winter.  When I began growing garlic in 1998 or so, I recall harvesting the bulbs in early August.  For the past two years, the garlic has been ready to harvest in mid July.  Whether or not this is evidence of climate change remains to be seen.

We had approximately nine inches of rainfall this past June.  Three to four inches in considered normal. http://www.erh.noaa.gov/er/gyx/climo/precipitation_normals.html

In July the rain continued–we had another nine inches of rainfall. The daily showers washed out gardens and prevented pollinating insects from doing their vital work.

I sat in my studio and watched through the window as it rained day after day. I saw climate change manifest itself as a living presence, not as some sort of scientific abstraction.

I read the series of articles on Climate Change written by Elizabeth Kolbert  as they appeared in the New Yorker Magazine in 2006.  The climate change documentation she provides is compelling and deeply concerning to all who care about the health of our planetary home.  RB

Elizabeth KolbertElizabeth Kolbert has been a staff writer at The New Yorker since 1999. Her stories for the magazine have included political profiles, book reviews, Comment pieces, and extensive writing on climate change. Her three-part series on global warming, “The Climate of Man,” won the 2006 National Magazine Award for Public Interest, the 2005 American Association for the Advancement of Science Journalism Award, and the 2006 National Academies Communication Award. http://www.newyorker.com/magazine/bios/elizabeth_kolbert/search?contributorName=elizabeth%20kolbert